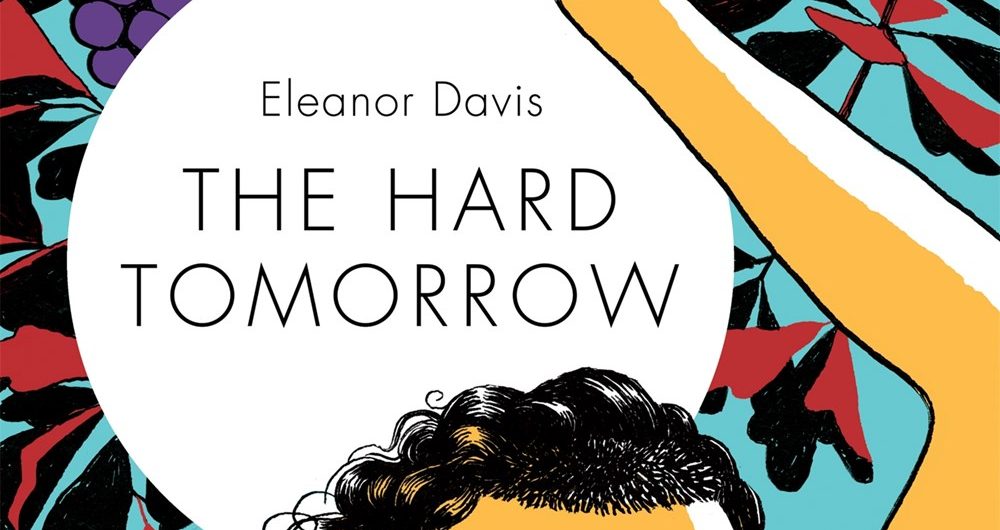 One of the things I find most interesting about Eleanor Davis’ comics is the way in which she addresses the ethical and political choices of her characters. Davis adds a level of ambiguity to her characters’ actions that leaves it up to the reader to decide if they’ve made the right choices. In The Hard Tomorrow, the primary characters are lovers Hannah and Johnny. Hannah is a local political activist who provides eldercare for a living, while Johnny sells pot and otherwise lazes about. They live out of their car and an RV out in the Kentucky woods. The narrative structure of the book is clear. Hannah wants Johnny to build her a house, for social injustice to disappear, and for her activist friends to be happy. Above all else, she wants to have a baby. The question that Davis asks is, “Is this a good idea?”

This is the issue that opens and closes The Hard Tomorrow. Along the way, Hannah goes through a journey that encompasses absolute certainty in her desire as well as her doubt. Hannah is at times almost blissfully naive and optimistic in the early going of the book with regard to everything in the world. She has a funny encounter with a cop that leads her to see the officer as a human, not just the enemy. Hannah counts on stoner Johnny to build her a house. She relishes the camaraderie she has with her political protest group.

The first challenge to her beliefs comes from Gabby, a key character in the book. Gabby is another member of the activist group, and Davis establishes her as a hardcore type both through her physical stature and strength, as well as details like her killing a rattlesnake. Gabby is clearly in love with Hannah, who is oblivious to this fact. Davis establishes Gabby’s feelings through close-ups and lingering images of desire on Gabby’s face. Hannah loves her deeply, but only platonically. It never occurs to her that Gabby is in love with her, in part because Hannah’s relationship with her is somewhat narcissistic. Hannah loves how much of a badass Gabby is because she wants to be that kind of badass. It’s why Hannah cuts her hair to look like Gabby’s at the beginning of the book, for example. A scene where Hannah feeds Gabby cherries is deeply intimate, but that reverie is broken when Gabby realizes that Hannah still wants to have a baby.

That’s when Davis, through Gabby, posits the essential objection to having a child:  is it ethical to bring a child into a world filled with injustice and horror? Unstated but implied through the context of Hannah’s political involvement are other questions. What does it mean for Hannah’s commitment to her protest group to want to have children? Is giving birth an act of political engagement or a withdrawal from political life? Given that Davis was pregnant during the making of this book, it seems likely that these are questions she was asking herself, as an artist and a dedicated activist who wasn’t afraid to get arrested.

Hannah is in a liminal state throughout much of The Hard Tomorrow, and the narrative drives her to make decisions. She’s somewhere between being a hippie and a regular member of the working class. She’s an activist but aspires to be a true bad-ass like Gabby. She’s not pregnant but desperately wants to be. She’s living a bohemian lifestyle but wants a house to go with her baby. She’s dedicated to nonviolent action but is inspired by anarchists to attack a cop during a protest. What Davis seems to be saying is that you can’t be in flux forever; if you don’t make your own decisions, they will eventually be made for you.

That plays out during the events of the narrative, where many of the activists are targeted by the government. They are forced to renounce their beliefs or else go to prison or face deportation. Gabby has to rescue Hannah from a cop during the protest, who was clearly inadequately prepared to deal with the reality of the situation. Hannah shouting “Police brutality! Wanton destruction of property! I want your fucking badge number!” as a cop stomps her phone and was about to batter her with a truncheon reflects her relative privilege and lack of engagement as an activist.

It was at that moment that Gabby realized that she had to give Hannah a push, as she told her that they couldn’t be friends. Gabby realizes that Hannah isn’t cut out to be on the front lines and would be happier and better suited to be a mother. Gabby loves her enough to let her go, realizing that they have no future together. When Hannah’s elder-care client dies, Hannah realizes how much she cares for her and how much the job means to her. Slowly but surely, she’s pushed out of her in-between states, which leads to the first and biggest question: motherhood.

Ultimately, Davis resolves that question when Hannah and Johnny reunite after the protest and all of their emotions spill out. He can’t handle her crying, and she can’t handle his laziness, and he hits her, and she hits him, and they fall crying into each other while a rainstorm rages around them. It’s a raw, ugly, and visceral scene. What comes after is a pregnant Hannah, the couple in a hospital (not a home birth), and the birth of their child. The decisions made by her friends, the increasingly fascistic nature of the government she’s living under, and a desperate desire for hope all drive her to eventually follow through on her desires.

Whether or not having a baby is a good decision is left to the reader to decide. Should Hannah have had a baby with anyone, least of all Johnny, who actually hit her? Making that decision meant that she was willing to live a particular kind of life in that political climate. It was going to be harder to be an activist. New laws put her at greater risk, in general, to go to prison, and those laws now had the additional threat of separating her from her child. At the same time, Davis emphasizes the image of the baby on three straight two-page spreads. The baby represents hope, and hope in the face of a fascist state is a radical, political act. This most personal of life decisions, in this case, was the most political.