Martin Vaughn-James is an artist nearly as mysterious as his work. Born in the UK in 1943, he spent his youth in Australia before emigrating to Canada. In his later years, he’d end up in Belgium. Very little has been written about or by him.

Good Reads lists just four works authored solely by him (though he wrote two prose novels, which aren’t listed). The Cage, originally published in 1975, is still available through Coach House Books. That particular work is an unsettling and poetic exploration through metamorphosing landscapes. There’s 1972’s The Park, which I’ve never read. And before them, there’s Elephant (1971) and The Projector (1972), both of which are now available in one hardback edition thanks to New York Review Comics.

These two stories are brought together because they share a protagonist: a bespectacled bald man, who is typically suited and looking ready for but ultimately resentful of the drudgery of office work. Readers will find Elephant on one side of the book, printed on clean white paper, and have to flip the book around to read The Projector, which is on matte gold stock. The art is mostly in black ink, although there are small moments where purple tones are used to highlight certain elements, such as the buds and blooms of the alien flora that appear at the end of the second story.

Elephant begins with another moment when a purple tone is employed. We’re presented with four panels over four pages, the first three being block color, the fourth having a hand in the bottom right hand of the panel, peeling the purple back as if it’s paper. This sort of metaphysical commentary on the comics panel is something readers of The Cage will recognize as being typical of Vaughn-James’s work. The metaphysics continues, when these hands are shown to be holding open a comic which shows those same hands holding the comic, and on and on in an infinite repetition, creating an example of the Droste effect.

This image of the hand holding open the comic is also split across two panels across two pages. This splitting of an image across two pages is another Vaughn-James trademark. He does it again when we find isolated figures atop rectangular structures; when our protagonist awakes in bed; and at various points in The Projector, too, such as the sequence during which vintage cars hurtle towards a Sphinx-sized old film projector perched on top of a hill.

With these techniques, Vaughn-James is playing with the standard sense of tempoarilty that the transition between panels creates in comics. Usually, we expect sequences of panels to depict movements in time, while here it is sometimes only used to present a change of perspective of space. As in The Cage, in both these stories, the play with comics’ metaphysics and its temporarlity works to unsettle the reader.

Becoming aware of these tricks also helps us to read – and possibly understand – these two stories. “Reading” is a difficult term in relation to Vaughn-James’s work. His resistance to normative narrativity is well-partnered with his interest in playing with and highlighting the various aspects and effects of the comics medium. Both stories are fusions of dream sequences and surrealist adventure. Elephant is drawn in bendy and cartoonish lines. Inanimate objects talk to each other, at work the protagonist and a superior drown in the geometric and fleshy forms they’re discussing, men with telephones and TV sets for heads make small talk. At one moment, you think it’s transitioned from a dream taking place in the protagonist’s head to depicting quotidian events at his office. But then the story spirals away again, bringing magic into the mundane, until finally the protagonist is in a world where he is repeated infinitely, and an elephant reminds him it’s Wednesday. The story finishes with him in his apartment, startled, a comic open and perched on his lap.

In both tone and content, Vaughn-James seems to have been heavily inspired by the likes of Luis Buñuel and René Magritte. A lot has been said of Surrealism’s influence on underground comics, though Vaughn-James’s work is perhaps some of the most explicitly Surrealist in how it shuns narrative structure, preferring instead to delve into subconscious connections and the way the material debris of life infiltrates our dreams.

The Projector’s prologue opens with a series of panels in which suburban architecture is depicted with more precise lines and detail than we find in Elephant, a style which is much closer to that of The Cage. It’s not long until a body, wrapped in cloth and tied up with rope, smashes through a glasshouse astride a horse. And then they fall (from where we don‘t know), and, during their descent, they turn into a picture image of themselves which is cut up by anthropomorphic pigs.

Following that, the protagonist is taken from daily routines to aggravating work, an empty theatre, and ruins of urban decay (I wonder if the author’s younger years in amongst the rubble of post-war England has anything to do with his persistent interest in these sorts of cityscapes). His job is to watch people, who hold coded briefcases with their mouths, crawling along a path, while he reads each code into a telephone.

Both stories are aged in so far as a lot of the references to mass media and the social satire feel very much a product of the 1960s counterculture: the inherent ridiculousness of blue-collar work; a focus on how alienation leads to a sense of hallucinatory detachment from whatever you take to be reality; Freudian readings of mundane objects; critiques of advertisement copy.

It feels relevant to note comics’ odd relationship with this sort of critique. Comics were often seen as a mass media, over-production of low culture. What comics artist has any right mocking the world of civil engineering and business operations? Or the boot of capitalism? Contemporaneously, mainstream comics trademarks have become the over(re)produced commodities of franchises that indeed create the sort of head-spinning overstimulation that Vaughn-James’s protagonist seems to struggle with. But then, the protagonist is reading a comic – was Vaughn-James aware of this contradiction all along?

For me, he seems to be saying that comics can take you somewhere you’ve never been, you just have to have some awareness of what that other place is – Vaughn-James certainly has a sense of comics’ potential to expand our horizons rather than restrict them. Plus, his stories would also be impossible to reproduce in another medium. The effects of his work are intimately tied to the particularities of comics, especially the panel.

“Damn this cube!! Everything is flat!!” declares the protagonist during The Projector’s finale. It’s a joke, of course; a cube by definition isn’t flat. Or maybe it is. Ceci n’est pas un cube. “It sits on us like a clock!!” the protagonist continues. Is he referring to the comics panel itself, comics’ time-maker and time-enclosure? It’s at this point he makes a run for it. From the office to a train, then he jumps off of that just as it’s crossing a bridge. The reader’s view is taken to the aforementioned alien flora before the protagonist is found once again, this time at the street we were introduced to at the beginning of The Projector. The damage caused by the horse and wrapped body seems to have disappeared. Or maybe that event hasn’t occurred yet. Did the protagonist succeed in escaping the flat, heavy weight of linear temporality? Has the reader?

Lacking a similar precision or quite the same degree of thematic wholeness, neither Elephant nor The Projector are as transcendental a reading experience as The Cage is. Nevertheless, this reprint offers us the chance to expand our understanding and knowledge of one of alternative comics’ surrealist masterminds. That both Vaughn-James and his work remain a mystery isn’t a problem, but rather a reminder that comics can produce a kind of magic, especially when they edge towards the elliptical and the interrogative and away from the certain and the expected. 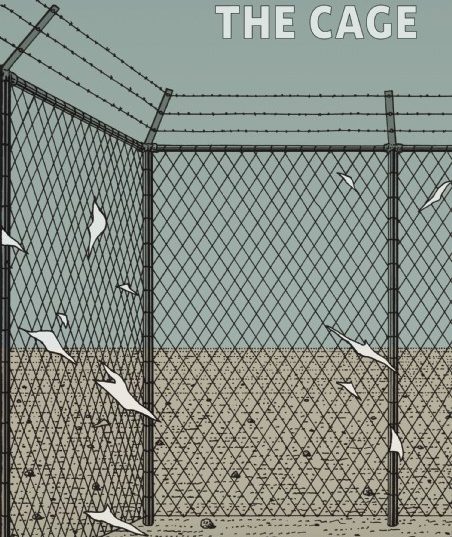 Significant Only Because It Remains: Martin Vaughn-James’ THE CAGE and the Ozymandian Ghost Story