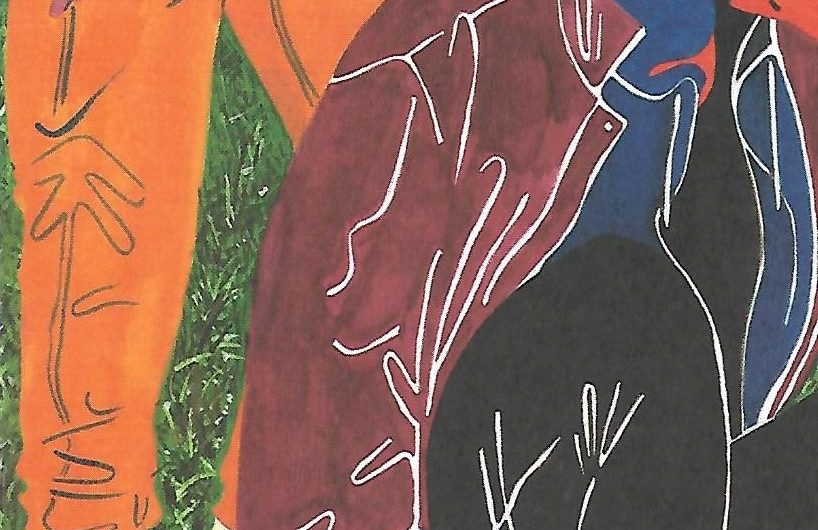 Despite an ongoing worldwide pandemic, the folks at kuš! put out a massive amount of comics last year. Tommi Parrish’s Sufficient Lucidity (mini kuš! #91) is one of the more notable, both because every new work by Tommi Parrish is something to look forward to, but also because Parrish is one of the few cartoonists who manages to write small stakes interpersonal conflict well. Their 2018 graphic novel The Lie And How We Told It pushed Parrish’s abilities to a new personal height, dealing with the embers of an old relationship with subtlety and wit, and was one of my favorite books of that year.

Sufficient Lucidity is similar, if a little more directly stated. The story is broken into two halves; in the first, an angry Andy breaks into the apartment that they used to live in, trying to reclaim their cat after disappearing for a few months. There’s a lot that needs to be intuited in the reading of this first half of the story, but it becomes clear after a few readings; Andy didn’t leave the living arrangement on good terms and appears to have had an emotional or sexual relationship with some of (if not the entire) group of housemates. Andy’s anger is reflected back a little more profoundly by the two unnamed housemates, and Emma, the third housemate, seems dumbfounded by Andy’s presence. The scene ends with a physical confrontation, as one of the unnamed roommates tackles Andy to the ground.

The second half of the story details a tense reunion between Emma and Andy. Andy has moved to a more rural area, worked on cutting back on their drinking, worked on themselves. The two former friends find a piece of loose brush to make into a bonfire, which is ostensibly the goal for them walking around the town in which Andy lives. The initial reason for Emma to reach back out to Andy is a little unclear, but it’s also clear that what both people were expecting from this meet-up is completely different. Throughout all of Sufficient Lucidity, Parrish obliquely gets at the effects that substance abuse can have on relationships – the alienation that all parties feel, the hurt and anger that can build up around the substance use. There’s also a small thread of grace and forgiveness, and coming to terms with the person you once were and the person you are becoming.

The full strength of Sufficient Lucidity lies in two places: Parrish’s beautiful cartooning and their ear for naturalistic dialogue. Regarding the first, Parrish has continued to refine their unique painted style, still emphasizing the human body’s physicality and the space it takes by inflating the hands and torsos of the characters throughout the book. Their painting and color selection makes each page a compositional beauty, but Sufficient Lucidity shows the evolution of Parrish’s style. While the use of purples and blues for skin-tone remains, as does Parrish’s sliding scale of facial detail, there are some significant changes. Compared to The Lie and How We Told It, Parrish avoids shading or contouring, instead adding detail that instills a sense of place in each scene. The change is subtle, but it emphasizes the emotional tenor of the work in a refreshing way. Parrish also includes some lovely scenic paintings and ends the book with a still image that is both gorgeous and emotionally resonant. To the second point, Parrish’s dialogue and interaction between characters is typically the highlight of every work they make, but I found myself surprised at how much Parrish is able to communicate throughout Sufficient Lucidity. The relationships between people, the brokenness of those relationships, their continued misunderstandings — much of this is implied and not stated forthright, so the reader will have to fill the lines in themselves.

What’s clear throughout this comic is that Tommi Parrish is an artist in full command of their talents, and it is clear that Sufficient Lucidity is a perfect encapsulation of what Parrish does best. Writing a powerful short story is difficult, and Parrish has delivered time and time again over the last three years, with entries in NOW and other anthologies. But with their emphasis on the things left unsaid, and the gaps they allow the reader to fill in themselves, Parrish has created a comic in Sufficient Lucidity that is emotionally fraught, a powerful meditation on human connection, and perhaps most importantly, a comic that rewards deep reading and reflection.