The coronavirus pandemic has had a way of altering the way we think about life, especially religious life. Jewish families celebrated the Passover seder via Zoom and Christians all over the world celebrated their Holy Week in isolation, away from their places of worship. Coronavirus has also had a significant impact on publishing schedules. These two factors consolidate in the publication of The Harrowing of Hell by Evan Dahm from Iron Circus Comics. Currently the comic is slated to be published in July 2020, but its original publication date was March 2020, timed to coincide with Christian Lent and Easter preparations. This is all relevant because The Harrowing of Hell is an apocryphal exploration of one of the major tenants of Christian faith; Jesus of Nazareth’s death and resurrection.

Some context before we get started: “The Harrowing of Hell” is an apocryphal story about the descent of Jesus of Nazareth (also referred to as Jesus Christ) into Hell. The story of Jesus descending into death, limbo, or the realm of the dead, and returning to life three days later in the Shekinah of Glory, is professed in a variety of Christian creeds. There is wide theological acceptance of his death and resurrection; that’s what Christianity is ultimately based on. What is not widely accepted is what happened in those three days between his death and resurrection. Spurred by apocryphal storytelling, specifically the Gospel of Nicodemus (which is a text likely written in 300-400 CE, far after the text of the original Gospel of Mark was written), many artists and scholars into the Middle Ages depicted this descent as a holy rescue mission where the righteous were freed from the horrible prison of burning hell. The most popular image of this tale is a painting by a follower of Hieronymus Bosch, titled Christ in Limbo, probably dated in the early years of 1500 CE.

In The Harrowing of Hell, Dahm’s expecting you to have this all figured out before you open the cover, so there’s a specific cultural experience that’s being interrogated by this book. To a certain extent, it is aimed at those who have been engaged with Christianity at some point in their lives, perhaps those who you would call radical Christians or those with a deconstructed faith experience. But rather than futzing around with the baggage of Christian mysticism and what I would call “Jesus fanfiction” that readers might expect in this story, Dahm strips most of that away to craft something that is more intellectual and allegorical.

If you aren’t drawn in by the intellectual musings of Dahm about the Christ figure, his inky line and dense illustrations might be the other hook that catches you on The Harrowing of Hell. Dahm’s style, built up over years of webcomics, is displayed in its full force in this comic. There’s a weight to his art that reflects the seriousness of its subject matter. For instance, as Jesus descends into the mouth of Hell, Dahm’s history as a fantasy artist takes over, with the souls of the damned becoming giant mouths with bodies galloping deeper and deeper into the Pit. While significantly less florid than the paintings of Bosch or the manuscripts of Vaux Passional, Dahm uses the thickness and otherworldliness of the setting to drive his illustration, leading to a powerful and unsettling vision of Hell.

There are a few linkages that I think are important to note that tie The Harrowing of Hell back to Dahm’s oeuvre. The anarchist, revolutionary, humble Jesus that Dahm presents is consistently focused on storytelling as a way to spread his ministry. The storytelling that Dahm himself favors is symbolic and convoluted, much like Jesus’ parables. Jesus also professes the power of storytelling as he repairs the net in a fishing boat with his disciples. The flesh will pass, but the word will last forever, he notes, and there’s a crystalline truth inherent in that statement — the fact that there is still a Christian church is proof of that point. Additional elements of the story mirror Dahm’s recent webcomic, Vattu, especially Jesus’ interaction with the Lucifer/Satan character near the end of the book. Jesus is tempted at the end, offered power and vengeance provided that he pass through to the other side; all he would have to do is side with the conquerer rather than the conquered.

There are also a fair number of jabs at the modern Christian church. The image of the conquering, war-like Christ has dug its way deep into the history of the Christian faith. It was in the name of Jesus that the Crusades were waged, and as Christianity was the de facto state religion in much of Europe, colonialism in the name of “spreading the good news” was common. Other, more modern atrocities are based on that same mentality. Many in the Evangelical Christian movement still use the image of the conquering Christ to justify specific antagonistic and antihumanist policies. Dahm slowly and surely picks at that history. He rejects the conquering Christ visually and narratively; Jesus is specifically illustrated as meek and diminutive, not the strong or muscular version often seen in modern illustration. You can also see in his depiction of Satan the image of Constantine, who used the power of the Roman empire to spread Christianity in early-to-mid 300s CE. This history, and the contortion of Jesus’ message, is a focal point of The Harrowing of Hell.

Dahm’s nettling of conservative Christianity is unlikely to cause major waves — these are the people who ban Harry Potter books from entering their homes after all, and a piece of heresy such as The Harrowing of Hell is quite unlikely to cross a conservative Evangelical threshold. But The Harrowing of Hell interrogates the core message of Jesus of Nazareth, that of rebellion against worldly forces, governments, and rulers, and the movement towards a body of faith that is communal, diverse, and caring. As The Harrowing of Hell reaches its predetermined conclusion, Dahm continues to wrestle with the philosophical meaning of the Christ figure; the final page shows Jesus of Nazareth climbing out of the tomb with his hands raised, while a pair of his women followers ask, “Who are you?” It’s a question that Dahm asks throughout The Harrowing of Hell, and, while he may not have found an answer, the journey he takes while asking it nears the sublime. 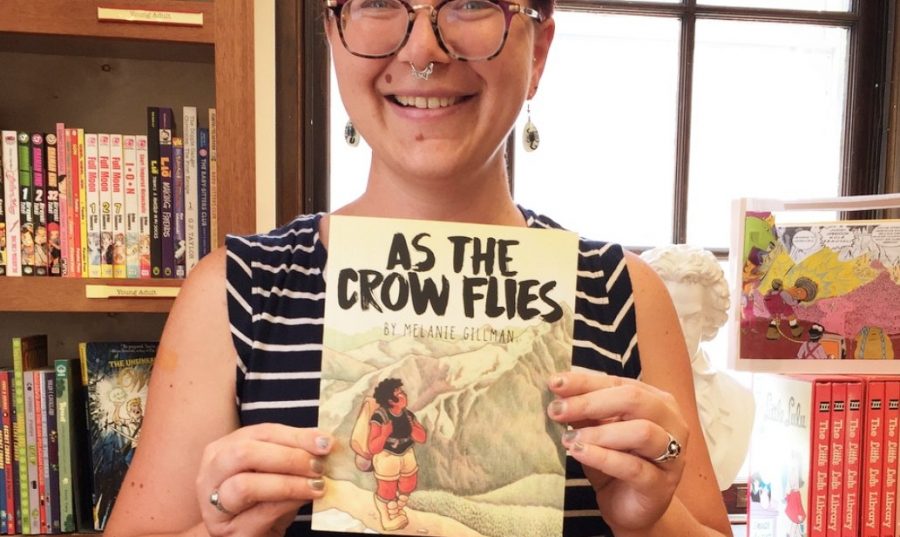 Knowing Is Half The Battle: Melanie Gillman Gives Advice on the Publishing Industry