As far as studies in fascinating contradictions go, they don’t come much more fascinating or contradictory than writer David F. Walker and artist Marcus Kwame Anderson’s The Black Panther Party: A Graphic Novel History (Ten Speed Press, 2021) a book that can fairly be described as thorough yet incomplete, dense yet eminently readable, visually stiff yet narratively fluid. And, like many a historical or biographical re-telling, it’s as notable for what it omits as it is for what includes.

First off, props where they are absolutely due: Walker relates the history of the Panthers in thoroughly absorbing, page-turning fashion, and does so under highly unlikely circumstances given that wordy caption boxes do most of the heavy lifting here with actual sequential storytelling instances being relatively few and far between. This is no easy task, to put it mildly, and yet, despite the impression one may understandably get of the book on first flip-through, it doesn’t come off as some sort of dry, extended “info-dump” — even in the parts that are, in fact, “info-dumps.” A seasoned veteran of the comics mainstream who has cut his teeth on titles as varied as Image Comics’ well-regarded Bitter Root, Marvel’s Nighthawk, DC’s Naomi (a character he co-created), and two absolutely superb Shaft mini-series from Dynamite featuring Ernest Tidyman’s legendary “blaxploitation” hero, Walker is a superb wordsmith with a penchant for infusing his stories with themes related to racial and social justice, a skill set that translates well to long-form historical projects such as this and his earlier The Life Of Frederick Douglass. Indeed, there is perhaps no writer in comics not named Ben Passmore who is more suited to bringing this material not just to light but to life. It is to Walker’s credit that his history of the Panthers eschews the easy option of hagiography in favor of a multi-faceted exploration of figures such as Fred Hampton, Huey Newton, Bobby Seale, and Angela Davis (among others) and how their individual successes, failures, and points in between both informed, and were magnified within and by, the Panthers’ organizational structure. There is a “rise and fall” trajectory to this story, to be sure, but that not only makes for compelling reading, in this case, it’s also historically accurate.

In fairness, however, one thing that stuck out to this critic is that for all the attention paid to the Panthers’ free breakfast, free groceries, and assorted community self-sufficiency efforts, the radical anti-capitalist agenda that was at the core of the movement is seldom referred to as such, even though notable Panthers were, themselves, quite explicit about it. Perhaps this is down to editorial interference on the part of the book’s major-publisher editors, perhaps it’s a personal choice on Walker’s part in order to make the group’s beliefs more palatable to the mainstream Democrats who undoubtedly make up much of the readership a project such as this is marketed to, and maybe it’s some of both, but it does feel like something of a missed opportunity to put a human face on legitimately (and, in my view at any rate, perfectly sensible) radical policies. It’s by no means a fatal flaw, but it means the picture painted is necessarily an incomplete, and, it could even be argued, an inaccurate, one. The Panthers were a soclaist organization, and that’s one of the things that frightened the powers that be most about them — but you’re not going to come away from this book with a terribly strong sense of that, as Walker pays far more attention to culture and community than he does to economics.

Another thing I found curious is that while Walker does an exemplary job of situating the Panthers’ history within the broader context of social and racial justice movements that preceded them, he shies away from drawing a direct line from their legacy to BLM and other groups/movements today. It’s entirely possible that he considered this to be beyond the scope of the project, or that he made a conscious choice not to draw either distinctions of parallels between “then” and “now” in order to allow what’s happening in the present day to stand entirely on its own, “uburdened” (if you will) by the past, but again — this strikes me as another missed opportunity. Speaking as someone who lives mere feet from George Floyd Square, I can tell you without hesitation that much of the education and radical organizing that goes on at events there — as well as the food and clothing giveaway programs that are constantly running there 24/7 — bear the distinct imprimatur of, for lack of a better terms, “Panthers-esque” programs. Their legacy, indeed, endures.

On the other side of the coin, while this is a text-heavy work, it’s still a comic, and the art of Marcus Kwame Anderson — an artist whose work I confess to being previously unfamiliar with — offers some noteworthy highs and some lows that I wouldn’t go so far as to classify as “deal-breakers” in any way, shape, or form. Undoubtedly a skilled illustrator, he captures the physical essence of most of the people involved in this sprawling saga quite well, often using innovative page layouts and composition techniques to draw the eye into even the “wordiest” of pages. A lot of this work bears all the hallmarks of (understandably, I hasten to add) being heavily photo-referenced, though, and with that comes a certain degree of stiffness and “posing” that likely can’t be avoided, but doesn’t necessarily play to his strengths. These strengths, however, are on full display in the handful of genuinely sequential segments mentioned earlier, where his natural storytelling skills and near-balletic action sensibilities really carry the day. It’s a shame the nature of this project — or at the very least the approach taken to it — didn’t give him a chance to flex these muscles a bit more, but, hopefully, the likely commercial success of this book will land him future assignments that showcase his abilities more fully. Anderson is also to be commended for finding and utilizing a largely-subdued color palette that really goes some way toward tying this entire episodically-structured story together into a unified visual whole.

All told, then, like the movement it chronicles, The Black Panther Party: A Graphic Novel History is not without its flaws, but it has its heart and head in the right place. While we could wish for more, it’s still exciting that a book this important and relevant will likely be fairly widely read. 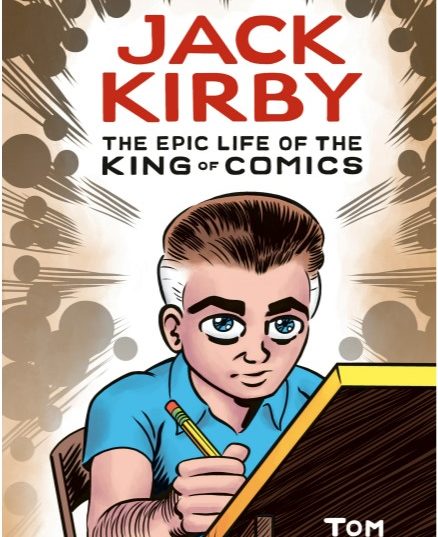 Between Heirography and Biography – Tom Scioli’s Jack Kirby: The Epic Life of the King of Comics

Tom Shapira is back at SOLRAD and today he consider's Tom Scioli's book about Jack Kirby, and asks - is this really a biography?