Heathcliff is a comics strip about a fat cat. One would think that it would be quite easy to anticipate the sort of gags you would find in a random daily strip about a cat: Heathcliff being naughty, Heathcliff’s owners being miffed with Heathcliff, possibly Heathcliff chasing mice — you know the drill. Yet in a strip published on March 30th, 2019 we see the feline protagonist in quite a different scenario: Two aliens, in a generic design taken from the 1950s, are poised near a grounded flying saucer. Heathcliff himself is standing on a ladder, popping open what we believe to be the ‘hood’ of the machine and tinkering with the engine. Beneath it all is the daily punchline – “I fear it’s a lemon.”

All of this, per Heathcliff tradition, is done in one panel. One might be surprised at the notion of the supposedly down-to-Earth old-fashioned gag-a-day strip using aliens. What more, the aliens aren’t even really the subject of the gag. Their existence isn’t met with shock or surprise. One cannot even be sure if the gag is that aliens visit or that Heathcliff is, apparently, a certified flying saucer mechanic. It’s a pretty out there strip – you probably wouldn’t see such a reality breaking gag in Garfield. Yet trawling through the Heathcliff archives of the last decade reveals that this event is far from unordinary. There are aliens. There are robots. There are giant (as in – house-sized) dogs. There’s the ever-present Garbage Ape (ask the internet, they would let you know).

In another Peter Gallagher era strip, back when the dailies were still in black and white, we witness (no pun intended) a truly bizarre scene taking place in court. There is a fish (in a bowl) testifying behind a mask, while Heathcliff and another person look with fear at the stand – “He’s in the witness protection program.” The gag, that a fish would be put in witness protection, is almost incidental. The bigger question arising from the image is ‘how did we get here?’ Which leads to a host of further questions: Why is a fish testifying? Is Heathcliff the accused or another lawyer? What is the trial about? If fish are intelligent enough to testify, what does it say about all of Heathcliff’s previous visits to the fish shop? What level of anthropomorphization are we dealing with here? None of these queries are answered, or even pondered, in any length. By the next day, the whole series of events is erased, replaced with something (almost) equally farcical.

On and on it goes. Almost every new strip brings with it more questions about the nature of the world we inhabit; none of which will be answered. In its own way, Heathcliff is more chaotic and random than Bill Griffith’s Zippy the Pinhead. Zippy, at least, is committed to its own surrealistic ethos. Heathcliff is committed to nothing. Every new strip wipes the world clean, every new strip builds the world anew. There’s no natural progression of events, and certainly no ‘continuity’ to speak of. One day Heathcliff is a house cat, another he is a fully employed person (with a driver’s license). The day after that… who knows? Heathcliff is forever what the strip needs him to be. He is not alone in that regard, the whole world of the comics is entirely fluid, casually changing to suit the needs of the ‘gag.’ Except there often aren’t gags, so the changes are for nothing. Heathcliff is simply a mechanic for aliens, enjoy!

The one-panel strip format is already a challenge, forcing the author to create a full story just from the implication of past events. A Garfield strip has, at least, two panels dedicated to the set-up. Heathcliff has no such luxury. In Heathcliff, the punchline must also contain all the steps that led to its existence. This is difficult, but far from impossible, as Gary Larson’s Far Side proves. Heathcliff, however, doesn’t even try. Attempt to recreate in your mind the set of events that led to the above-mentioned strip with the fish testifying in court. Or to the one with the aliens. Or that the oft-quoted, newly-popular, “Meat Tank”. You can’t.

It’s hard to tell if  Gallagher is being lazy, simply going with his first idea without considering it further. Maybe he is committed to a particular sort of anti-humor which inverts all the expectations of a daily strip. Or maybe he’s just playing it up for the hate-readers and people who mock it online (every new appearance of Garbage Ape seems to suggest the latter). To plumb the depths of his reasoning might be as maddening a task as plumbing the strip itself. Heathcliff simply is — an unshakeable fact of existence. Anything else about the strip is up for grabs.

Incidentally – on the day I am writing this (January 26, 2021) the daily Garfield strip does contain a joke about aliens; specifically – that the idea of aliens appearing in a daily comics strip chronicling the adventures of a house cat is a ridiculous notion. Garfield, both the character and the title, is familiar, comfortable. Hence is his endless popularity both as a commercial figure and as meme fodder – since people know what to expect you can easily subvert their expectations. You cannot, however, make a meme out of Heathcliff, because the reader never knows what to expect.

In How to Read Nancy, Mark Newgarden and Paul Karasik’s landmark study of one comics-strip as a microcosm of the form, the writers note how every element of the traditional comics strip reinforces itself continuously. The familiarity of characters and gags become not a hindrance but a boon. A good cartoonist is a jazz improviser  – finding new variations on the same familiar notes. The one strip Newgarden and Karasik chose to study was picked precisely for its unremarkableness. It featured Nancy and Sluggo tangling with a water hose:  “Nancy and Sluggo had engaged in intermittent squirt-gun hostilities for many a summer, a recurring aspect of the pair’s sporting rivalry.” A reader learns rather quickly to recognize all these disparate elements and finds joy in the manner in which they are put together.

In Heathcliff, that sense of familiarity doesn’t really exist. For sure, there are recurring ideas one learns to associate with the strip over time. Robots are popular, Heathcliff’s father as an escaped convict pops out, Heathcliff flying with gum… but none of these help to form a coherent whole, they remain unconnected notions. Nancy and Sluggo fight with water hoses because they are children in a suburban environment, form follows function. Heathcliff is a cat in a port town and thus he… fixes flying saucers, what?! Robert Warshow once wrote that “The comic strip has no beginning and no end, only an eternal middle.” This is certainly true of Nancy (who would always tangle with Sluggo) and Garfield (who will always frustrate Jon) and Peanuts (Charlie Brown will never get to kick that football). Heathcliff, on the other hand, has only an eternal beginning. With every new strip, God (the cartoonist) creates the world anew: “Now the earth was formless and empty, darkness was over the surface of the deep, and the spirit of God was hovering over the waters.” So it is with Heathcliff – ‘formless and void’ indeed. 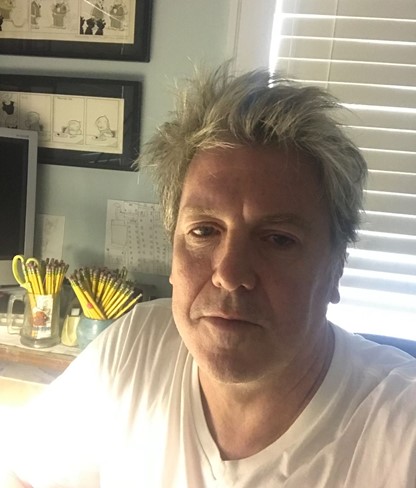 Let the Art Stand for Itself: A Conversation With Peter Gallagher

In April 2021, Andrew Neal wrote about HEATHCLIFF for SOLRAD. One thing led to another, and we have an interview between Andrew and Heathcliff's current creator, Peter Gallagher! Enjoy! 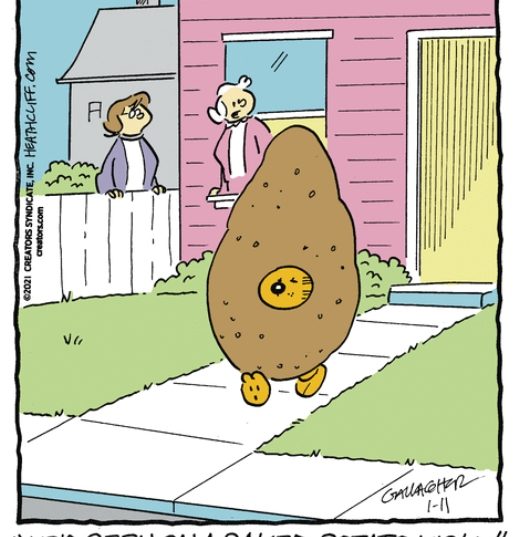 We wrap up our discussion of Peter Gallagher's HEATHCLIFF with a wide-ranging essay from F. Stewart-Taylor featuring Brian Eno's Oblique Strategies, Dada, B Kliban, and Barthes. Enjoy! 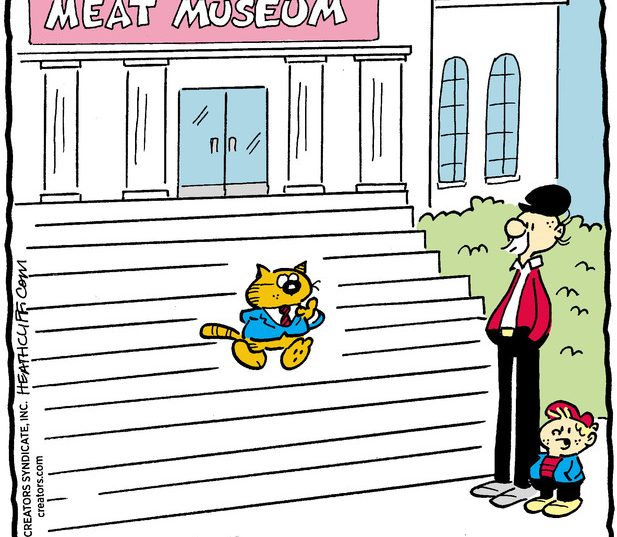 Heathcliff Askew: Neural Nets, Benign Violations, and the Absurdity of the American Dream

What does Heathcliff the cat have to do with neural nets and the American Dream? More than you think, argues SOLRAD's publisher Alex Hoffman.