There aren’t enough drugs in the world Eddie Wright and Dave Chisholm carve out in Tyranny of the Muse. Oh, there are drugs and drug-taking, for sure, that is if you consider cigarettes and coffee drugs – you should and they are – but the panoply of pharmacological interventions known to you and me thanks to modern-day psychotherapy are absent. Especially for the story’s poor put-upon protagonist, Frank Fisher Jr., who’s bleeding from a weeping crater over his right eye. To borrow generously from a former Long Island local, “Frank is just speeding away / Thought he was Juli Epstein for a day / Then I guess he had to crash / valium would have helped that bash.” Any antidepressant would do for Frank, really, remember when Lou wrote that lyric in ’72, valium was about all that was in a doctor’s bag for what would later be diagnosed as “depression.” Lorazepam would have helped that bash better.

Frank has a much bigger monkey on his back, he’s hooked on pure, uncut “inspiration” that comes from a needle housed in a dildo-shaped device supplied by a shady health & beauty company, “Inspicorp,” and administered by a “muse,” Bonnie, who delivers this encouragement directly into Frank’s frontal lobe. This is putting the plunger before the needle. Sorry. It’s a cheap trick to let an oft-repeated song lyric from a dead rock icon do the heavy lifting for something even as mundane as a comic book review. But when you can quote Lou, you do it, and twice on a Sunday morning.

Back to Frank. He’s in a bad way from the jump and the gaping head wound is the least of his problems. His screenplay, “A Big Pile of Misery” has stalled, several times, it seems, and he needs a new jolt of inspiration; that’s where Bonnie and Inspicorp come in. Frank wants to finish what appears to be, yes, a big pile of misery about a boy named Dusty, his abusive father, and his absent mother. Frank isn’t a screenwriter anymore than he is a painter or guitar player or sous chef (probably). He’s likely tried ‘em all and none scratch Frank’s itch because like the character Tom Sizemore plays in “Heat,” Michael Cheritto, Frank is addicted to “the juice” i.e. the process a/k/a the game. The final results are unimportant and inconsequential. It’s all a matter of means, fuck the ends. Frank’s screenplay is the latest in a long line of projects he has taken a shine to since first getting hooked on Inspicorp’s toothpaste, diversions and deferments for what’s been eating at him since he was a kid. For inspiration look within.

Tyranny of the Muse is a roiling cauldron of anxieties, manias, and depression cobbled together with irate-pinky-promising mail carriers, a lost contact lens, addiction, misplaced rage, an anthropomorphic hamster, home dentistry, self-help topped off with maternal love. It’s based on a novella, “Broken Bulbs,” which Wright wrote a decade ago. Given the subject matter, it wouldn’t come as a surprise if Wright has tried to adapt “Broken Bulbs” into other media prior to this. Wright’s effort appears genuine and less desperate than writers who come to comics when their short story, screenplay, or video game pitch fails to gain traction or a benefactor. I’m looking at you, Image Comics. Wright picked a hell of a collaborator to help him pour new wine from an old bottle. “Broken Bulbs” must be quite a cinematic treat if half of what Chisholm draws can be found in the source material. The written word wasn’t made to capture the sheer horror and utter disgust of a do-it-yourself dentistry which Chisholm turns into a masterclass of perspective and dental anatomy rendered in starkest black-and-white. Chisholm goes back to this image one too many times which diminishes its initial shock and power, but good ideas (and images) endure, and watching Frank jimmy a steak knife into his jaw by his own reflection, that endures.

Chisholm is a cartoonist’s cartoonist. There’s some splashy and show-off-y stuff like the mirror shots and Bonnie’s missing contact lens which gives her a visual detail that complements her wild child bravura. Again, how would that have worked in the source material, if at all? Chisholm succeeds in perhaps the most mundane and important way a visual storyteller can with the knowledge that THIS IS A COMIC BOOK and, in order to maintain the reader’s interest, it’s a good practice to change angles and vary one’s compositions. No cartoonist wants to draw talking head after talking head for panel after godforsaken panel and no reader, consciously or unconsciously, wants to read that shit either.

Comics are a team sport so give Wright his flowers too. “A Big Pile of Misery,” the screenplay Frank is fighting through, turns out to be a story that hits close to home for ol’ Frank Fisher Jr., which is half the reason he can’t finish it.

Trauma is a hell of a drug.

Wright makes it plain that inspiration doesn’t come from some farcical sci-fi corporation and its mail-order “muses,” it comes from pain and anger, secrets and lies, shame and ennui. Frank is like Dorothy, who always had the power to go home, but had to learn it the hard way. Once Frank figures the only way out is through, he too goes home, literally. The muse and the Inspicorp-supplied inspiration Bonnie metes out is bullshit. Frank’s problem lies with Frank. Perhaps, if he had sought out counseling, his head wound, excessive tooth brushing, and run-ins with a maniacal mustachioed mail carrier could have all been avoided, it’s like that great piece of cartoon woodpecker “copaganda.” Counseling and a ‘script for an SSRI would have done Frank wonders and probably wouldn’t have had him wearing a crown of bandages to cover up the literal hole in his head and the metaphorical one in his heart.

Some thoughts about muses and the women of Tyranny of the Muse: Bonnie, Frank’s “muse” gets the majority of the ink, but attention needs to be paid to Bonnie’s boss, Vanessa, the owner of Inspicorp. Mythologically, the Grecian muses were goddesses and the sources of inspiration in literature, science, and the arts. By their grace (will), they would inspire artists (mostly men) to create. They performed a service; their relationships were 100% transactional. Wright takes up a lot of pages and time explaining how Bonnie got mixed up with Inspicorp and how she played a preformative muse before she got recruited by Vanessa to get paid to do it. She’s neither tyrannical nor a tyrant, she’s an errand boy sent by grocery clerks to collect a bill. She’s plausible deniability with a spiky haircut and a missing contact lens, which is why when she figures out what Frank really needs, her actions come as a surprise to her and the reader. She’s more than an arm needed for needle-jabbing, she cares about Frank – whom she calls “baby boy,” a giveaway as to the root of Frank’s fuck-ups – and wants to see him well. She has her reasons, guilt knows no gender, after all. Bonnie’s backstory and her motivations are unsatisfying and dull – the same goes for Vanessa – each origin is pro forma compared to the zaniness Wright invents for Frank. As muses go, Bonnie and Vanessa are two-dimensional at best and, at worst, boring and quite uninspired. Vanessa prattles on and on about being a spark and says she sees the same in Bonnie, but neither has a soul to fan such a flicker. The Greeks adored the muses, worshiped them, and, sure, their entire reason for being was purely transactional and slightly kinky, but they embodied passion and there’s none of that desire within Bonnie nor Vanessa, they are in it for the filthy lucre and that’s it, all else is forfeit. The other woman who dominates this sordid tale (and the only one who matters) is Mrs. Frank Fisher, Frank’s mom, is the one who truly inspires her son. Again, this is a comic book, not a therapy session. Not to get too Freudian and psychoanalytic, but Frank’s mom is the (only) woman Frank needs, not Bonnie and certainly not Vanessa or her snake oil.

Despite all its needles, knives, and failed screenplays, Tyranny of the Muse treads familiar ground and reminds readers that love is the drug. To borrow, outright steal, AGAIN, from that “young man in high school” who wanted to “play football for the coach,” I’m talking about the Coney Island Baby here, baby, never underestimate that “the glory of love, glory of love // Glory of love just might come through.” This is dedicated to Kelly and Dusty and all the kids at P.S. 192. 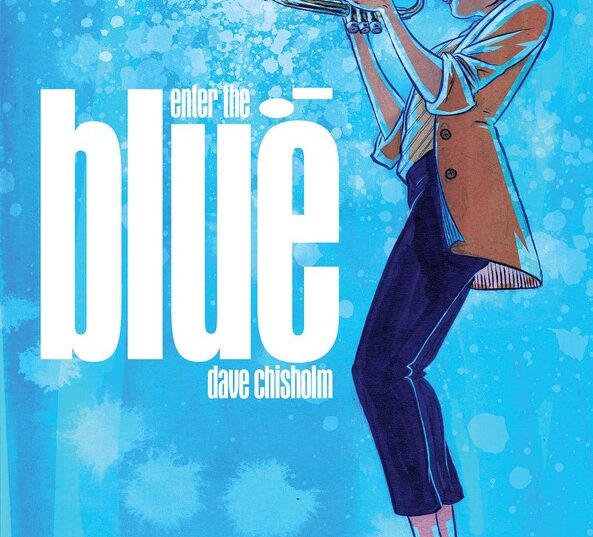 Get In the Zone: Ed Haynes Reviews ENTER THE BLUE By Dave Chisholm