It struck me, reading through the collected print edition of Alex Graham’s celebrated online comic strip Dog Biscuits that the cartoonist herself recently self-published via Lulu, that there are things about 2020 that, in the fullness of time, many of us will come to feel a kind of nostalgia for. It was nice, for instance, not to have to wait in long lines at the few businesses that were open. It was nice to have a built-in excuse not to attend certain events and activities that a person would just as soon avoid. And for those who are in the process of returning to the office or have already done so, the whole work-from-home thing was a pretty slick deal while it lasted. Given the rose-tinted glasses through which most people perceive the past — particularly their own past — my best guess is that these nominal “pluses” will stand out while all the shit about the pandemic that sucked will slowly and inexorably recede from view.

If and when you find yourself falling into that trap, however, Graham’s comic is as close a thing as you’ll find to a perfect antidote, and freed from the constraints of a back-and-forth with readers/commenters in real-time (a subject that Graham and her friend, writer Lane Yates, tackle with aplomb in the book’s afterword), it’s able now to stand as a statement rather than a developing text. What’s perhaps most surprising, though, is to discover that said statement extends well beyond the confines of the locked-down life that it was both a product of and commented upon.

A primer, then, for those arriving to this work after the fact: Graham initially started it as a means of whiling away the time at a job with no customers and nothing to do, but as she found herself inevitably furloughed from said gig it morphed “on the fly” into a long-form project that consumed the better part of a year of her life and became a focal point for readers living through much the same set of incidents it portrayed, a la Simon Hanselmann’s Crisis Zone — the fundamental difference being that Hanselmann set out to make a daily “pandemic comic,” while Graham ended up making a daily “pandemic comic.”  As something of of an “accidental epic,” then, one can easily notice that both Graham’s art and her storyline become more focused, tighter, dare I say at times even more belabored as her little side-project turned into her magnum opus, but that just adds to the authenticity of the overall experience when reading it between two covers — all art is fundamentally inseparable from the circumstances and events behind its creation, of course, but that’s never been more true than it is here, as the “adventures” of Rosie the rabbit, Gussy the dog, Hissy the frog, and their circle of friends/lovers/relatives/”frenemies” are both pandemic-based and pandemic-made. Art initiates, life imitates — but I digress.

Why I think this work is more successful as a book than as a daily strip largely comes down to time and its passing, or lack thereof — there was always a fundamental incongruity to the whole idea of a story that takes place more or less entirely over the Fourth of July weekend being piece-mealed out in small doses for the better part of a year, but as a collected and completed finished work that’s not an issue at all. Which isn’t to say that Graham shouldn’t have serialized it online — indeed, her decision to do so provided a lot of people with free entertainment at a time when it was sorely needed, even if it meant that some folks formed attachments most generously described as “unhealthy” with certain characters (see again the book’s afterword/postscript) — but Dog Biscuits was a product of serendipity from the jump (provided you can look at underemployment and, later, unemployment as being fortuitous), and, as such, there’s a certain poetic justice, if you will, in the idea that it’s found its ideal iteration after all is said and done.

As mentioned earlier, though, the broader theme that Graham is exploring here, while undoubtedly exacerbated by the pandemic, is in no way actually beholden to it, that being: we are all of us complex creatures who fuck up, and sometimes those fuck-ups are maybe for the best. In a world where the squares are busying themselves in a counter-productive effort to make sure that everyone on their side of the socio-political divide is portrayed as entirely virtuous and everyone on the other side is portrayed as entirely despicable, this ruffled some feathers — and no doubt will continue to do so — but out here in the real world, as is the case with Graham’s Hissy, it’s entirely possible to be a victim of police brutality and a privileged, self-absorbed nitwit. The characters in this story aren’t either/or equations playing at a zero-sum game — they’re individuals, subjected to the forces around them, making decisions about their lives. Unlike many a self-contained work, though, the decisions presented herein are informed by these folks’ — sorry, animals’ — pasts, and are undertaken with wildly varying degrees of concern in regards to their futures.

Gussy, for instance, being older and having suffered the consequences of ill-advised choices made earlier in life, can’t help but over-think every single goddamn detail when it comes to his nascent romance with Rosie, while Rosie, herself, understandably would still like to live a little before settling into the phase of life her prospective paramour already inhabits. Such complexities are par for the course in this comic, and while some of them don’t necessarily hold up to a ton of scrutiny — like the idea of Gussy, who, let’s remember, is an anthropomorphic canine himself, makes his living selling fancy “artisanal” dog biscuits (hence the title) to yuppie scumbag dog owners — most of them do, and, to her unending credit, Graham is all about providing no easy answers. Not just because 2020 didn’t have any to offer, but because life itself seldom, if ever, does.

To that end, if — like myself, all the characters in this book, and presumably Graham herself — you happen to lean left politically, be prepared to have some of your preconceptions challenged herein. If you believe that all “May-December” relationships are inherently exploitative, that only men can be sexually predatory, that psychologically and/or emotionally abusive upbringings absolve you of the consequences for your actions, this is a work that dispenses with such notions as easily and completely as it puts the lie to shit we can all agree is utter nonsense, like “the police are your friends.” The funny thing is, though, even when the dialogue in this book is at its most expository, Graham never hits you over the head with anything, and never fails to see the humor in just about everything. For all this work’s polemical value — and it has plenty of that, especially if you happen to be a Seattle resident — it’s never less than really funny, too. It’s just that it’s the kind of funny that doesn’t care whose delicate sensibilities it offends, much less whose worldview it tramples underfoot entirely. In other words, the best and most honest kind of funny.

Factor in the sheer technical proficiency of Graham’s cartooning — her self-imposed deadlines frequently adding a sense of immediacy to her art while in no way compromising its quality — and what we are left with is something very much of its time, but that, I submit, will come to be seen as a truly timeless comic. In fact, things very much appear to be breaking that way already — Dog Biscuits in serialized form was, at least in this critic’s view, the best comic of 2020, and in its collected form, it’s an even stronger work and stands a damn good chance of ending up as the best comic of 2021, as well. 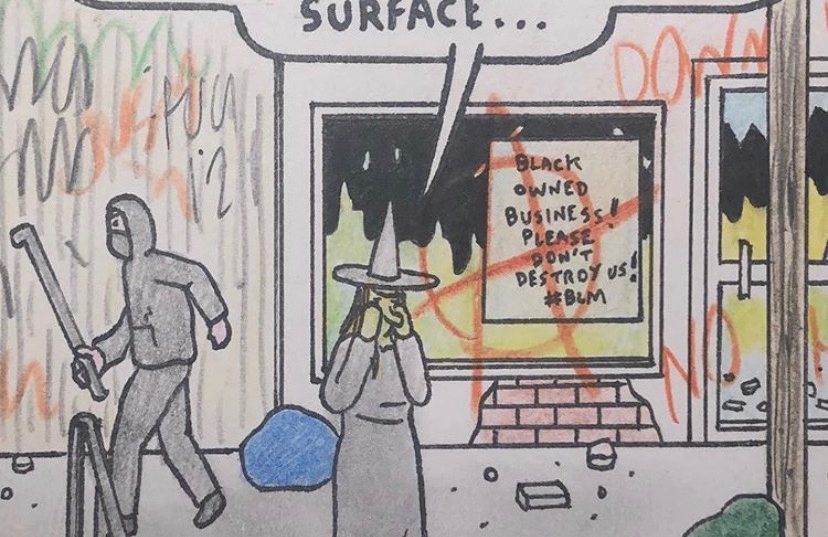 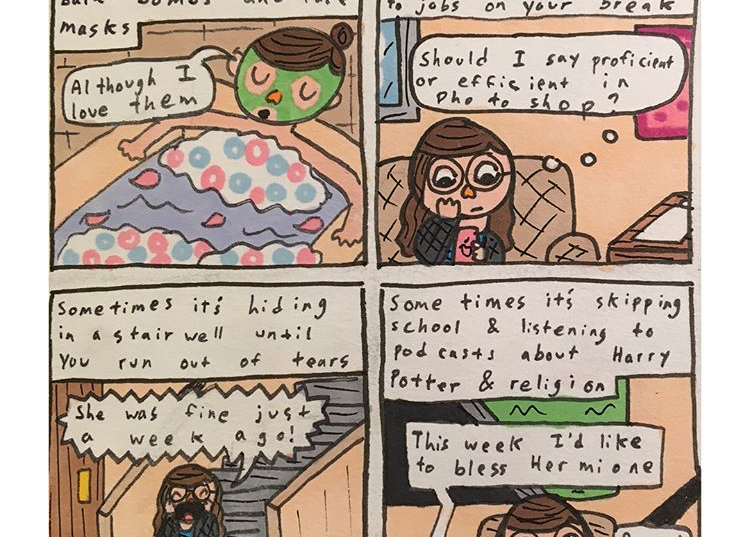