Marc Charles is one of those figures that comics scenes the world over rely on. Someone who, in their spare time and for barely any financial remuneration, dedicates themselves to the medium: writing reviews, connecting artists, recommending books to libraries, running events, etc. Being involved in awards juries and book launches for many years now, he’s been researching and keeping a track of the often atomized constellation of artists that forms the comics scene in Spain as elsewhere.

Teaming up with local publisher Extinció Edicions, Charles has organized a high-quality anthology driven by a desire to publish artists interested in telling stories: Forn de Calç. Its name – Catalan for a type of kiln – points to the way in which this project aims to be more than just a “melting pot”: it’s a pressurized space in which artists can grow to become more concrete and firm as storytellers. There’s a long heritage of comics magazines and artist collectives in Catalonia, but, for this project, Charles took particular inspiration from elsewhere, specifically Kramers Ergot and Eric Reynolds’ work on NOW.

There’s little that connects the featured artists formally, though no matter whether it’s first-timers or old hands, Forn de Calç boasts quality from front to back. For some, such as Berta Cusó, who provides a lovingly painted four-page tale, this is their first exposure to the public as a comics artist. There are also more established names present: Pep Brocal has been working since the late 80s; Cristian Robles drew the eye-catching if rather unsettling cover and Sergi Puyol provides five pages in his more typical charming and expressive style. About half of the 76-page magazine will be hard to interpret for non-Catalan readers, but there’s plenty of mostly silent work, and the art alone is worth enjoying.

Charles was on hand to provide insight into the project at the magazine’s recent launch in Barcelona. Some of the contributing artists were also there, and I got to catch up with two of them, Mar Mascaró and Nadia Hafid. With six years between them, Mascaró and Hafid represent two ends of the new wave of Spanish comics. Hafid has illustrated for Monocle and The New Yorker and was awarded a title equivalent to Best Newcomer by the comics association ACDCómic for her debut long-form comic, El buen padre (The Good Father). As demonstrated by her contribution to Forn de Calç, Hafid’s signature style is one that draws heavily on classical cartooning’s efforts to reduce forms to near abstraction while retaining an emotional punch. She draws by hand, though her precise and clean lines build a geometric world, and she utilizes effective combinations of block coloring and subtle differences in shades to draw attention to key aspects of her panels.

Meanwhile, as her Instagram attests, Mascaró is confidently bouncing around approaches and styles. Her eight pages in Calç are particularly singular. Based on the artist’s interest in negative colors and negative stories, an interest that results in a world that looks like ours but whose colors are inverted; ghostly white lines and striking outlines depict a world of anthropomorphized revenge against predatory behavior. The increasingly disorientating page layouts include a collage of Psalms and David Foster Wallace quotes.

After speaking with Hafid and Mascaró, it’s clear that artists of different ages and generations in their scene are keen to inspire each other. The launch was the first time they’d ever met in person, but they’ve been communicating through Instagram for some time. They’re also both demonstrative of the fact that female talent is dominating the Spanish underground and impacting the mainstream (the book also features a few typically creative and wild pages from Genie Espinosa, who I interviewed for SOLRAD a little while ago).

There’s plenty to discover elsewhere in Forn de Calç, and with plans to make it an annual or biannual publication, it’s set to become a space where comics artists can experiment with stories and ideas. One of the main characteristics of the current scene is its collaborative spirit. When I asked Mascaró about her experiences with other artists, she replied: “It’s zero competitive. I always get the sense that we’re helping each other out.”

The magazine opens up with a piece by Gabri Molist. His absurdist tale utilizes repetition for comic effect. Andres Magán’s black and white tale traces the misadventures of a desperate gardener whose inability to put a hose down proves to be his downfall. Pep Brocal’s uniquely toned psychological horror is packed full of popular culture references. Though her figures are deeply cartoonist, Laura Garcia’s black and white world has a tangible, dusty quality to it; her linework produces arresting patterns. To conclude, the back cover boasts a darkly funny four-panel tale of avoidance from Peter Jojaio, one of the contributors who has a long history in the comics scene.

In total, Forn de Calç #1 is a more than promising start for a magazine whose aim is to bring even more excitement and attention to an already burgeoning scene. I often love anthologies, not because the stories or the art is better than in other places, but because the format demonstrates how comics works: through artists playing with each others’ styles and feeding off each others’ energy in a playfully (non!)competitive manner. You can pick up a copy of Forn de Calç via Extinció Edicions and from Fatbottom Books, amongst other retailers.

Exclusive Excerpt “Me and My Friends” by Bailey Sharp, published in š! #37 DOWN DOWN UNDER, co-editor Michael Fikaris

Today we have a second exclusive excerpt from the latest kuš! anthology featuring Australian cartoonists. 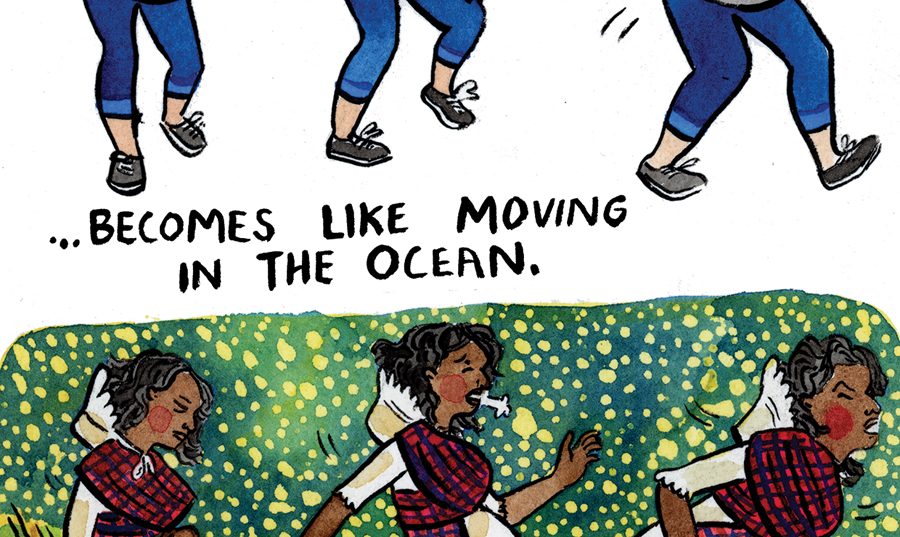 Exclusive Excerpt “Pursued by Soldiers” by Eleri Harris, published in š! #37 DOWN DOWN UNDER, co-editor Michael Fikaris

Today we have an exclusive excerpt from the latest kuš! anthology featuring Australian cartoonists - "Pursued by Soldiers" by Eleri Harris.