Gabriela Güllich is a reporter, comics artist, and scriptwriter from Brazil, with a Bachelor’s degree in Journalism from the Federal University of Paraíba. She has published two books (Quatro Cantos de Um Todo e São Francisco) and works as a freelance cartoonist and journalist.

Gabriela is currently heading the Entre Quadros (Between Panels) section of the Mina de HQ website, where she publishes interviews with other cartoonists twice a month, all in comics format. She sat down with me in the shapeless meeting room of the internet to talk about comics and its relationship with journalism, and why ink is always better than pixels—even when it smudges.

MARIA CARVALHO: What came first, drawings or written text? Back when you were a kid, what was your relationship with comics and newspapers like?

GABRIELA GULLICH: Drawing came first. I guess it comes first for everyone, yeah? Kids are always doodling even before they know what they want to be when they grow up… I started going to drawing classes at maybe eight years old, and I love to mix butterflies and flowers into my homework (I loved making acrostics with people’s names and decorating everything). I read a lot of Turma da Mônica and Revista Recreio, but I didn’t read a lot of printed newspapers. Even though I love print, to this day I still don’t read [a lot of newspapers] because I have pretty bad allergies and [the paper makes me] start sneezing (That’s right, a journalist who’s allergic to newspapers).

MC: And what books were big in your family? Were there any book series that everyone followed in your home, any author that everyone read?

GG: I think there are two authors that everyone back home loves: Quino and Bill Waterson. I had a Portuguese teacher (who was also my drawing teacher for a long time!) who really loved Mafalda and who loaned me that one gigantic Toda Mafalda book, and then I fell in love. Mafalda and Calvin & Hobbes are two texts that unite our collective family tastes.

MC: So what authors made you think, ‘Okay, mixing journalism and comics is possible’?

GG: It may seem like everyone in graphic journalism talks about Joe Sacco all the time, but it’s just because there’s no escaping it. It was that initial contact with his work that made me like graphic journalism, and when I went after Brazilian references the first ones [I found] were Alexandre de Maio and Carol Ito, who today are [my] really dear friends. I’m really glad I got to have direct contact with those authors.

MC: And did you always know that graphic journalism was an area you wanted to work in? Or did that realization come midway through things, when you were already doing GJ work.

GG: No! Actually, I never really thought about working in illustration, despite having taken drawing classes my whole life. What I wanted to do, for as long as I can remember, was to be a journalist (to be more precise, I wanted to be Gloria Maria). I just drew because I enjoyed it, really.

It was only during my undergraduate journalism studies that I found out about graphic journalism, and it was pretty much by accident. Right at the beginning of school, there was a class called “Research Applied to Communication”, and we needed to write a paper. I was never a big fan of academic language, and since that was my first paper, I thought it would be easier to find a subject which I was already familiar with. And so I went on Google and searched for something like “journalism and illustration” to see what [results] came up, and that was when I found out about [Joe] Sacco’s work. That year I bought Joe Sacco’s Palestine and Marjane Satrapi’s Persepolis. Those books completely changed my perspective on non-fiction narratives. After that, I redirected all my academic research to graphic journalism.

I spent at least two years just doing research until I finally did make my first comic, Quatro Cantos de Um Todo, while working as an intern at SESC Paraíba.

MC: In your 2018 paper, “Illustrated narratives and their importance to Journalism: a case study of Khost maternity”, you talk a little about taking graphic journalism to stories that go beyond conflict, about expanding the scope of the field with experimentations in both narrative and technique.

With that in mind, how was it like to work on “São Francisco”, a book that mixes photojournalism and graphic journalism techniques? How did the two of you, you and João Velozo (co-author), prepare yourselves to report on that story, which covers the countryside of both Pernambuco and Paraíba, two States where water distribution and conflict oftentimes walk hand in hand?

GG: It was an amazing experience. São Francisco is basically all I believe in when it comes to journalism: going directly to the source, having contact with the people you’re interviewing, hearing and seeing many things that I probably would not have had contact with, living in the State capital (I lived in João Pessoa.) And [also] having the opportunity to tell these stories that happen in Paraíba and in Pernambuco alongside João [Velozo], who is from Pernambuco, and who’s not only a dear friend but also someone whose work I have a deep admiration for. It was amazing. I still get emotional with the fact that it got printed exactly as we wanted it to: independent journalism, financed collectively, and having all the repercussions it had later. It went beyond what we expected, [and] we are very grateful to everyone who believed in the project with us.

As for the process:

The idea of writing an article about the Transfer [of the São Francisco River] was João’s, it’s something that he had wanted to write about even before we knew each other. We met in 2015, and I think it was in 2017 that we first collaborated, in an article for Deutsche Welle. We also worked together in an article for VICE, but those collaborations were [done using] my writing and his photographs, we hadn’t tested illustration and photography [together] yet. One day, João came to me with the idea of writing a book that mixed comics and photography, and I loved the idea. [However] I was still a little worried, [because] at the time I still hadn’t published anything; I didn’t want to take up such a big job just like that. And I’m really glad we waited it out, because it would have been impossible to do a project like that one without having any experience.

So we started saving money and, at the end of 2018, I published my first book with SESC. At that time I was also working on the initial stages of my undergrad thesis, which was also an article-comic (Filhas do Campo: um retrato em quadrinhos de agricultoras assentadas na Paraíba), so I already had a much better foundation to work on an article-comic book. We had decided that the moment to make the trip would be before my last undergrad semester started (a wise decision), so we set a date between January and February of 2019.

From that we sketched an itinerary with every city that makes up the East Axis of the São Francisco River Transfer, and we decided that we would grapple with three themes: the abundance of water, the drought, and the construction. The idea was to really show all those diverse scenarios, to get people out of that idea of broken soil that people usually have when we talk about the sertão. João already had some connections in the towns, because he had worked around the region for an article before we started travelling, [and] that helped a lot. We did the budgeting on accommodation, ticket expenses, food, travelling, supplies and [any other] possible extra expense. With all of that done on various spreadsheets and notes, we hit the road [and that] became the script for the book.

MC: Who are your influences today, in journalism and in comics?

MC: For the final questions I’d like to talk to you a little bit about how you organize your writing and drawing processes, and about what projects you have coming up. First: do you prefer digital or traditional illustration? What’s the best ink and paper combo?

GG: Traditional! I love ink, so I try to do only the smallest possible amount [of work] digitally. [I use] Winsor & Newton ink (that little bastard is expensive, but it’s good.) and for paper I don’t really have a brand preference, as long as it’s above 180g/m. Generally I go for Canson.

MC: What is your creative process like? Do you usually draft things before moving to refining and finals, or does everything kind of happen all at once?

GG: As Phoebe Waller-Bridge would say: panic, panic, hope [Laughs.] When I’m working on a graphic journalism piece and I’m the only one who’s going to read its script, that script is more or less inexistent.

Since I’m the one who’s doing the illustrations, I build the text like a regular article, [and then] I draw the thumbnails on my planner, following what I’m reading, to try and better visualize what kind of framing I want to use. When I start to draw on the actual paper that I’m going to use, I don’t do much pencil work. I just set the grid; I don’t really have a lot of patience for drafting. I leave it all to the inks. Sometimes, after drawing a couple of pages, I even end up drawing the finals completely differently from the thumbnails, but I [still] really need those initial guidelines so I don’t get lost.

MC: What new projects do you have on the horizon?

GG: Right now I have Jogo de Sombras (Shadowplay), a horror graphic novel I’m working on with Isabor Quintiere, a writer from Paraíba and author of A Cor Humana. It was my first time [working] on someone else’s script, and [Isabor’s] first time with comics. We loved the experience. It’s pretty much done, but the release was delayed due to the pandemic. I’m also finishing another comic, Arruda, an autobiographical story by Tali Grass. That one still doesn’t have a deadline. Besides all that, every month I talk to women in comics from all over the world for Mina de HQ, where I publish an illustrated interview section called Entre Quadros.

MC: And finally: what’s the worst thing that can happen when you’re drawing comics, doing the balloons before the lettering, or accidentally smudging your inks?

GG: I never draw the balloons before the text! Ha! I do all the drawings, then I scan them and add both the balloons and the lettering on Photoshop (I recently made a font based on my own handwriting and it was one of the best things I’ve ever done. I highly recommend it.)

Unfortunately, getting your inks smudged before it has had time to dry is a real problem and it happens more often than I’d like to admit, so I’ll take that option.

Maria is an illustrator and cartoonist from north-east Brazil who spends their time yelling about academia and sharing horror comics where all ends (mostly) well. 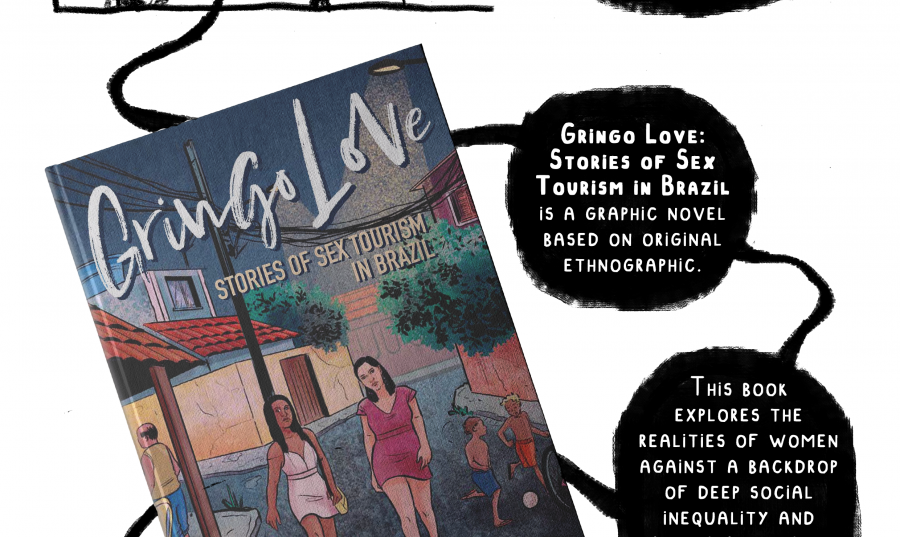 Today, we're pleased to present an interview between Gabriela Güllich and the team behind the comic Gringo Love - in comics form!