The effects of COVID-19 on comics artists are both immediately evident and also unquantifiable. We know, for example, that cartoonists are less likely to be working non-comics jobs, which means additional sources of income that pay bills aren’t there. We also know that many festivals aren’t happening, which reduces extra income from participating (if they even break even; there’s a discussion to be had about “making table” that I don’t care to get into right now.)

The effect of these closures and changes is that some folks are turning to modes of income generation they wouldn’t have otherwise in order to get books made. This is true for Lucky Pocket Press, a small risograph press based in Baltimore run by Sara Hagstrom and Stephanie Bulante.

After seeing their Kickstarter campaign for CANVAS, I decided to reach out to them to learn more about what they do and how they do it. CANVAS has already funded They also included K. Theo Stultz, the artist for CANVAS in the conversation. SOLRAD is also pleased to run an extract from CANVAS, which can be found here.

Alex Hoffman (AH): Lucky Pocket Press is a pretty young press – for folks that haven’t heard about you and what you do, could you talk about how you got started?

Lucky Pocket Press (LPP): Of course! We’re a two-person risograph micropress and artist collective based in Baltimore, Maryland, and we formed in July 2019! We met during undergrad at the Maryland Institute of Art and both had really similar interests in the intersection of printmaking and illustration, and we both had backgrounds in selling our work individually at small press shows. We really longed for a more collaborative experience, so LPP kind of started there! We formed the idea around our love for art that feels warm and evocative; something that feels special and lucky to hold. Risograph printing produces something that feels tangible and authentic, but can also create many multiples and is eco-friendly, so it’s perfect for reaching wider audiences! Both of us are really passionate about ethical and sustainable creation, so we try to produce as much as we can in-house and by using local finishing services. With that in mind, we thought it would be appropriate to take the skills we were privileged to learn at art school and use them to lift up marginalized voices within the art community. What we really want to do is make risograph more accessible for artists and storytellers by publishing short comics from artists we love. We went on to crowdfund our risograph and are really grateful that we were able to make this press a reality!

AH: Could you tell me how you are deciding what books and artists to work with? Do you take pitches, or reach out to artists whose work you like? Are you more hands-on with this process (for example, editing work or asking for rewrites) or do you take a more hands-off approach?

LPP: It definitely varies from project to project! We tend to reach out to artists whose work we admire, and ask if they have any interest in pitching to us. We’re really artist-led, so we basically proceed from that point and work on what the artist wants to produce. We’re definitely open to pitches from artists too (feel free to email us!), but we are only capable of working with a few artists at a time because we’re only two people! For editing, in general, we take a more hands-off approach in art making and add more support with the risograph preparation, such as preparing files and deciding binding/finishing logistics. We like to really just bring artists’ stories to an accessible platform, so we really give more advice than art directing most of the time!

AH: Something I’m asking publishers right now is how they feel the current global climate is affecting their local work. What has it been like running this Kickstarter campaign during the COVID-19 pandemic? Has anything changed about your process or your planning?

LPP: It’s definitely been difficult on a lot of small creators, ourselves included. We actually weren’t planning on kickstarting this project, but since all of our events got cancelled for the year we needed to crowdfund the project instead of debuting it at a show. It sucks, but it’s something we’ve had to adapt and push forward through. The small press and comics community is seriously so supportive, it consistently blows our minds! The kickstarter itself is much more loose than our previous campaign- since everything is so up in the air right now, our fulfillment dates are really just projections, as we’re not sure when our binders and laminators will be operating normally. The great thing about this situation though is the amount of compassion, flexibility and understanding that everyone has shown creators.

AH: What do you think the world of small press comics looks like when this pandemic is all said and done? What role do you think small presses like yours have in the aftermath of all of this?

LPP: We feel that art and expression are really, really important in times like these. Comics and zines have an especially important place in the cultural climate during times of global emergency, not only for expression but also for the spreading and relaying of information that would otherwise not be available. Now more than ever, comics provide a platform for those who are voiceless in these times, and as a community, we have to lift those voices up, listen, generate empathy, and organize. Art is something that will always be needed. It’s really a beautiful thing that we can incite change, and we believe one of the most powerful ways to do that is through storytelling. We definitely expect conventions to be conducted differently in the coming years, but we’re optimistic that small press comics will always have a community and a place in publishing.

AH: How did you choose CANVAS as your second major book?

LPP: When we were first throwing around ideas for our press, Theo was actually the first person we thought of to collaborate with! We’ve known Theo and his work for a while and are both such huge fans. Theo’s work is so textural and enchanting and dreamlike, and we thought it’d work so perfectly for risograph printing. We are so glad to be able to collaborate with him, it’s been such a dream and we’re so excited to get the book in everyone’s hands!

AH: Theo, could you give readers some detail on CANVAS? What inspired the project?

K. Theo Stultz (KTS): CANVAS is about a scatterbrained painter-in-training. Frustrated with her inability to find a model, she makes a wish for one and stumbles into a deal with the wishing well’s fairy. CANVAS was inspired by Catharina van Hemessen’s 1584 self-portrait at the easel. I love that painting! I love how kind of over it she looks! Something about it made me laugh. I was looking for something silly and light to write about after finishing my thesis, and thought making a lot of funny pictures about a high-strung, dopey painter lady sounded like fun. Thanks to Lucky Pocket’s help, the comic has become something I’m really proud of.

AH: I find it really interesting that you call out CANVAS as something that feels silly and light. Obviously I haven’t read the book yet, but it seems like there’s a lot of drama to your drawing, especially the way you pose figures.

I make a lot of dreamy, unreal stories, and that drama carried into CANVAS for sure. But for this project, I wanted to make something that reminded me more of the stories that first got me into comics. A lot of the books I really loved as a kid combined humor with strangeness and fantasy, like Bone. Of course, CANVAS isn’t a grand epic like that, it’s a bite-sized fairy tale, but the humor in Bone has always inspired me just as much as the drama and adventure.

AH: One of the things I noticed immediately in the sample images is this economy of line in your characters, especially their faces, and the button nose that I associate with early animation. Is this an intentional reference, or a stylistic evolution of a visual shorthand you’ve been using in your cartooning?

I try to worry less about drawing things that look good and more about drawing them in a way that feels fun and easy. I find that if I do that, they end up looking nice no matter what! Nothing drives me to draw more than having fun, and letting the way I draw change and evolve is a big part of that. I’d say the button nose evolved that way — pushing little things about how I draw to the point where it’s kind of silly. If it makes me smile, then I’ll do it.

Thanks to Steph, Sara, and Theo for taking the time to talk with me. You can find out more about Lucky Pocket Press and the CANVAS Kickstarter below. You can also read a 6-page preview from CANVAS here. 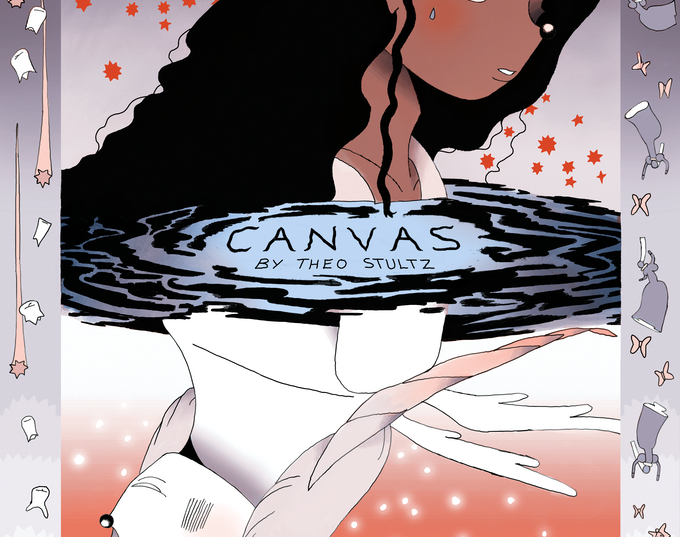 Today we have a 6 page excerpt of CANVAS to accompany our interview with Lucky Pocket Press and K. Theo Stultz, who are running a Kickstarter to print it.