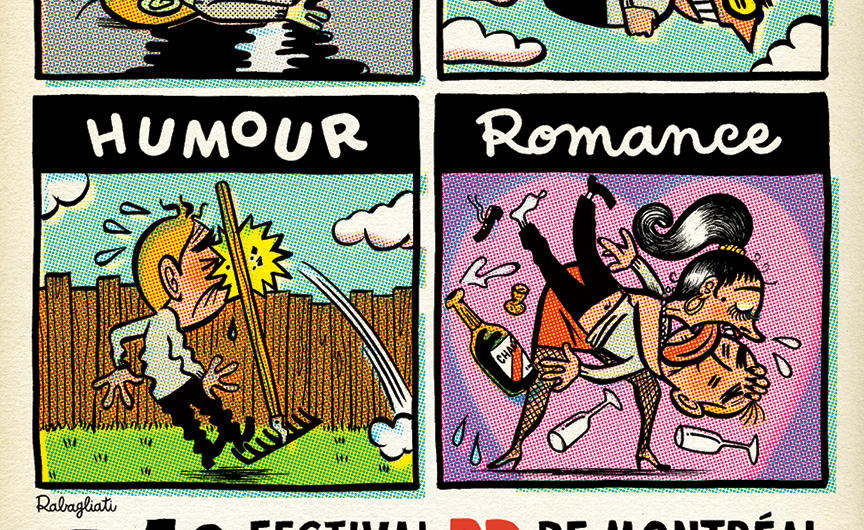 Rue Saint-Denis has been closed to traffic. Five blocks, usually filled with cars and trucks, are now occupied by the white stands of the MCAF, the Montréal Comic Art Festival, also known as Festival BD de Montréal, unrolling on May 26-29. For its 11th edition, the first in person after two years of the pandemic, the festival has left its usual site at La Fontaine park and has taken over the streets: after a first rainy day, the weekend is being blessed by the sun. A lot of tourists from the USA, mostly young people (the border is just an hour’s drive), have joined the local comics readers’ community. And long queues are forming to get a book signed by the authors attending the MCAF.

In Montréal, the most populous city of Québec, French is the official language, but it’s actually a bilingual city. The MCAF has made an effort to represent both the francophone and anglophone local comics scenes. There are, however, some similarities with French festivals like Angoulême, especially regarding the variety of the readers: people of all ages, from children to seniors, are walking among the stands, chatting with the artists, browsing and buying books. Only a tiny group of cosplayers, though very well organized, patrols the street. It’s fun to hear people, during the round tables organized by the festival, switching from French to English and vice-versa, without any apparent reason!

Most of the bookstores in Montréal have a big section dedicated to the bande dessinée (that’s the French expression for comics, meaning “drawn strip” and often shortened in BD) but Montréal is also the city where Drawn & Quarterly, one of the most important comics publisher in North America, is based. They have a stand at the festival, of course, along with the other big publisher in Québec, Pow Pow, devoted to francophone BD. French publishers like Gallimard, Hachette, and Glénat are attending too: they all have a division operating in Canada. But the organizers have made the interesting choice of mixing up the well-known publishers with many small and independent ones and even self-publishing authors: there seems to be no hierarchy in the stands’ disposition.

This fits well with the general spirit of the MCAF. The festival is very committed to promoting publishers and authors from Québec, with specific attention to the self-publishing world. The local comics star Michel Rabagliati has created the illustration for the MCAF’s poster and he is attending with a 275 pages new book filled with interviews, commentary, and unreleased stories about his semi-autobiographical character Paul. Another cartoonist born in Montréal, Julie Doucet, awarded last January with the Angoulême Grand Prix, is at the MCAF with a new book, Time Zone J, her first since the Nineties.

Maybe as a reaction to the Covid-19 pandemic which forced the festival to move online for two years, 2022’s theme is “Making Connections”. Therefore the MCAF has brought to Montréal a good number of international authors. The Brazilian Marcello Quintavilha, winner of the Fauve d’or this year at Angoulême, is here. Also attending the MCAF are Brecht Evens from Belgium, R. Kikuo Johnson from the USA, Elene Usdin from France. Me and Lorena Canottiere are here representing Italy: speaking of connections, the Festival has worked with Italian institutions to create the exhibition “Vicoli and Ruelles”, which gathers works by comic artists from Québec and Italy exploring the urban space. Ruelles are the back alleys in Montréal, in some way similar to the typical Italian narrow streets called vicoli (The exhibition’s catalog can be found here in open access). The MCAF is also hosting a special event dedicated to Chilean female cartoonists: five of them are in Montréal for the launch of the catalog Chilean Women in Comics (a free copy can be downloaded here).

The philosophy of the festival is mirrored by its awards, called The Bédélys. They spread from local to global. Marcello Quintanilha repeats his Angoulême success by winning the Bédélys International Award for his book Écoute, Jolie Marcia. Zviane wins the Bédélys Québec with Football-Fantasie. Two awards are dedicated to self-published works: Tuer le peintre by Étienne Poisson and Olivier Robin wins the Bédélys Independent Francophone, while Marc Michaud, with the three volumes of ARC Twenty-Nine, is awarded the Bédélys Independent Anglophone.

Comic artists are probably not the best when it comes to social relationships, but you can see that even they (us!) are happy to be back to normal. The MCAF is a reminder that connecting with other artists, and, most of all, with the public, is an essential part of the job. This is probably why in Rue Saint-Denis there is a generally relaxed atmosphere and many smiles! The pandemic however taught us that virtual can be useful too, so the festival is going to release videos and audio recordings of the round table discussions and creator conversations on its YouTube page. MCAF has released some numbers for this 11th edition: 80,000 visitors, 240 creators, and 124 exhibitors have gathered in Rue Saint-Denis. Next year’s edition is already underway, the MCAF will return to Montréal on May 26-28, 2023.

Previous PostSOLRAD Presents: The Lighthouse in The City: July 6 – July 12Next PostWill I Thaw Out In The Spring? — Alex Hoffman Reviews THIS IS HOW I DISAPPEAR by Mirion Malle
0Shares
Festival BD de MontréalMontréal Comic Arts Festival