Bursting with brilliant color and written with a sincere, honest voice, Arantza Peña Popo’s comics are both visually and emotionally stunning. Recently, you may have seen her work in The New Yorker, Polyester Zine, or on the homepage of Google as the national winner of the 2019 Doodle for Google Contest. Arantza also received a ShortBox Mini-Grant this summer and publishes “California Dreamin’” for the Daily Trojan on a biweekly basis.

Arantza’s comic, “What They Do in the Shadows,” is one of my favorites, and also one of the first comics of hers that I read. I’m so glad I got to talk to her about it and other things she’s been working on since.

KS: How did you first get interested in comics?

APP: So I think it was in middle school. So at first, I didn’t read comics—I was reading a lot of books, just not comics. It was Reina Telemeiger’s Smile, I think, and if not, it was probably Anya’s Ghost. I borrowed it from my friend, and I was like OK this is really good. It was such a relatable story, like an angsty teenager, and it just really stood out to me—really connected through the story.

So after that, I started trying to find as many graphic novels as possible I liked. I really love Jillian Tamaki’s work, finding just any kind of graphic novel I can get my hands on. And it spread out more, and I started realizing that the comic book world wasn’t as small as I thought. I went to an indie comics fair, and that’s when my perspective of comic art really widened, like there’s a lot more people and a variety of topics I could talk about with the medium.

KS: That’s really cool, I also really like Reina and Jillian’s work. And Anya’s Ghost. I guess next is how do you juggle art and other work as a full-time student?

APP: It’s kind of difficult because there’s always the part of me that’s like, I wish I could have a full-time art career. It’s kind of like trying to balance…it’s like wanting to do work, wanting to get a good grade, to get a degree or whatever, but part of it is like, with all this uncertainty, I kind of want to live in the present and just make art right now instead of worrying about the degree I’m going to get in the future. It’s kind of a weird balance right now—trying to do art at night and do my work in the day.

Sometimes it blurs the line. Sometimes you just don’t want to work at all. And it gets later in the day. So it’s like a balance of trying to make sure that I’m always kind of doing the bare minimum of work, but at least I’m getting the classes I need done. But also still creating art that I like. So I spend more time [on that]. So it’s not like a hard balance. I don’t think I’ve figured out this formula yet.

KS: Yeah, it’s difficult. I just graduated and I realized how little time I had during college.

APP: Exactly, exactly. Yeah, you just realize it’s 1 a.m. and you’re like “Oh, crap, I haven’t drawn at all today.” So you just like, get behind sometimes.

KS: Yeah, I feel like especially, sometimes posting on social media makes me feel like I’m behind on something when I feel like, in the end, it doesn’t really matter. But still, there’s weird external pressures sometimes.

APP: Exactly, yeah, I get what you mean. I think what rings with me is I read a post that was like “tips for Instagram” or something, and I kind of created a schedule in my head, and I’ve been so behind. It’s like pressure—like you think there are eyes watching you, waiting for you to put out work. ’Cause I get it. I feel that pressure.

KS: So, going off of that, what kinds of things drive you to make comics and keep creating? What inspires you?

APP: I guess I don’t know. Can I start [talking about] before I started making comics? I guess maybe it’s a morbid note. I didn’t start making comics seriously until I got into quarantine. It wasn’t a thing in high school. I honestly just put them in my sketchbook. I didn’t really put them out. It was when I was back in quarantine, and I don’t know, it just became really intense chaos.

And I was like, “Oh crap.” It was like, “If I die or something happens I’ll regret never having made comics and never putting things out there.”

So I guess that’s my motivation for making comics. I just was crapping out comics, but I guess now it’s changed a little more. It’s kind of like less the fear of chaos and more that my road to comics is kind of more like—I don’t want to say therapy—more an emotional output, I guess. And knowing my voice is valuable. A lot of emotions I’ve had are like prior or in the past, so I can kind of mull over and introspectively think about past events. I guess it’s cool. I just like making, I just like products—making external objects or extensions of myself—if that makes sense. Just little pieces of myself being put out into the universe.

KS: That’s really cool. And I feel similarly, like a lot of things happened during quarantine with self-isolation.

APP: Yeah, I think the quarantine is crappy, I guess not that I wanted it to happen, but without the quarantine, I probably would have not started drawing the way I did.

KS: Going off of that I really admire your comics and art because of how you incorporate social justice into them. Could you talk a little about how social justice and activism inform your work?

APP: I think it’s interesting you say that. Can you point out the comics you think are activist?

KS: Maybe activist isn’t the right word, but they talk about a lot of social issues in a way that’s very personal and honest. Probably one of the first comics I saw of yours was “What They Do in the Shadows” when you’re walking to your dorm and people are singing…

KS: You talk about your feelings very plainly, and not simply, but the way you put it out is very easy to understand. I don’t know how to say it, I think they’re just really cool. [laughs]

So I guess that it informs my work in the sense that, I guess at first, at least what I try to do…so when I try to make comics, I’m not thinking directly about grand social justice. It’s mostly like a personal experience, and then that experience becomes like a microcosm. Like one kind of point in the whole landscape. Like, this one experience is me. It wasn’t me going, “Oh, let me talk about covert or hidden racism,” it’s more me talking about my own experience while in the comic I realize it’s not just about me. It’s about all these little ways that racism kind of sneaks into our lives.

So I think I try to spin it on a personal level because it’s more relatable, and it disarms people. Like Bianca Xunise and other comic artists use their personal experiences to disarm people. The first example is of yourself and then you bring it back to the bigger thing. That’s how it kind of works on things like racism. Or like another comic I did about the board of crappy sex education system—use these small personal stories and then bring them back to the wider perspective.

KS: Kind of wrapping up. I have a couple more questions. One is “What goals do you have for the future?” Kind of big, maybe what are you kind of thinking about as you’re going into your next year of college. What kinds of things are you thinking about in terms of art or just in general?

I think now, I’m trying to find my style or my voice and cement that because I feel like my art style is all over the place. Practice a bit more—learning to draw other things and just kind of being a lot more adventurous in my topics and not being scared to approach topics that might be controversial or scare me, more adventurous and out there, not being so scared of what other people may think.

KS: One last thing, what role do you think that art and comics have played in your life and how has that changed over time?

APP: I think initially when I was a kid—middle schooler, high schooler—for me it was more of an escape. I think, at least for me, comics have always been a more democratic form of literature or media because I feel when I was reading books…when you talk about comics they feel more juvenile to people. But once I started getting into them, [I realized] they covered more topics—like, I don’t know, like Jillian Tamaki’s work and other artists—they’re a good medium to cover controversial topics, an escape.

But now it’s just really cool. It’s a livelihood. I used to call myself an illustrator, but I don’t think I am one. I think I’m more a comic artist. I love comics. For me to live and survive off comics, to me that’s like my lifeblood now.  It’s just something in me that I have to make comics. Like I have to read them. I have to indulge in them. They’re a part of my life. And now I feel it’s a way to get to know other people. Like a lot of other people, it’s a type of approachable medium to the public. A means of connection. I think the outside work with people who may not be involved in the art world can still be connected with comics because it’s visual, but also literary media. So that’s what it means to me right now.

Find Arantza on Instagram @_ara_pena_, and check out her portfolio arantzapopo.com. 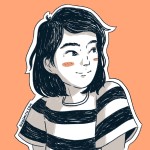